Mediation efforts in the Amherst case have failed, and the case has returned to the court docket. The Massachusetts college, about which I’ve written previously, provided perhaps the most troubling of the campus due process cases; the college failed to discover text messages that decimated the credibility of the accusing student (hereafter A.S.), and when the accused student (the boyfriend of A.S.’s roommate) did so, Amherst said it was too late to correct the record.

After the collapse of mediation, there have been three new filings in the case. The most interesting, from the accused student’s attorneys, contains a snippet of the deposition of Allyson Kurker, Amherst’s hired investigator. This case turned on Kurker’s inability/unwillingness to ferret out contemporaneous text messages of A.S.—which portrayed the incident as consensual, in which A.S. considered possible lies about the incident (to spare herself the social fallout), and which contained exchanges with another student that contradicted her subsequent testimony to Amherst.

Not only did Kurker fail to uncover these messages, but her report claimed that A.S. had assured her she had no relevant text messages or e-mails—an obviously false statement. Amherst’s previous filing implied that Kurker only was looking for text messages that confirmed A.S.’s story, or at least that A.S. might have interpreted Kurker’s questions in that way.

That fiction can no longer be maintained. In the deposition, Kurker made clear that when accusers change their minds about whether they were sexually assaulted, what they previously said about their attack isn’t relevant to her inquiry. She added that she was interested in contemporaneous writings from the accuser only “to the extent that the incident is being described as nonconsensual.” Kurker continued: “The only e-mails that I would have found material” were those in which A.S. had described the incident as nonconsensual. This standard suggests that Kurker sees her job as not searching for—indeed, arguably concealing—potentially exculpatory evidence.

A second filing came from Eric Hamako, one of the three panelists who rendered the judgment in the case. Amherst’s procedures deny an accused student a jury of his peers; instead, he goes before three student life administrators from surrounding schools. Hamako then worked at Smith—as program coordinator for the Office of Institutional Diversity and Equity (a position hardly known for employing aggressive civil libertarians). He now teaches at a community college in Washington state.

At one point in the hearing, A.S. indicated that she had texted someone on the night of the incident—to come over and comfort her, she said. (Actually, she had texted this student before the incident with the accused student, and had invited him to her room not for emotional comfort but to have sex.) Yet, of course, Kurker’s report indicated that A.S. had no relevant text messages. Here’s how Hamako responded to this critical information: 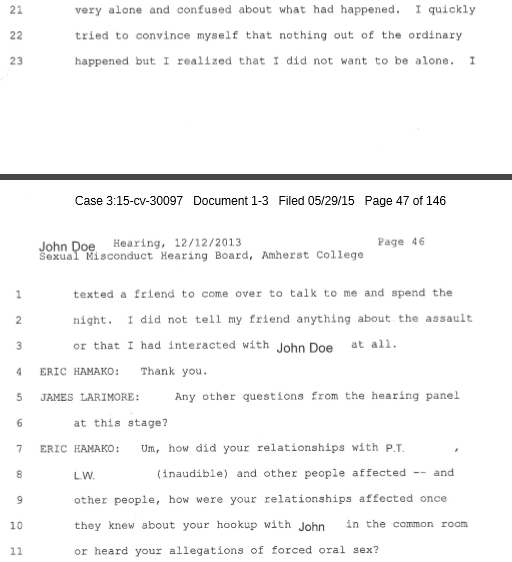 So: rather than ask A.S. about the key evidence in the case, and to explore why she had misled Amherst’s investigator, Hamako asked about her relationship with her friends. It’s almost as if he saw his job as not asking A.S. any questions that might undermine her story.

The accused student’s lawyers subpoenaed Hamako; he filed a motion to quash the subpoena, which you can read here. Even Judge Ronnie Abrams, author of perhaps the most unfair due process decision (Vassar), allowed disciplinary panelists to be deposed, in the Peter Yu case. Hamako contends that because the transcript of the hearing is available, he can’t provide any relevant information. He adds that he should be excused from testifying in the civil suit because “courts outright forbid disappointed litigants from probing jurors, judges, arbitrators, and other decision-makers’ mental and deliberative processes.” Yet the entire fiction of the college disciplinary process is that it’s wholly unlike the criminal justice process (with judges and jurors) or even arbitration (with protections for the parties under federal law). Nothing in Hamako’s brief suggests support for providing accused students with the protections of the criminal justice system, which might explain why it would be unnecessary to probe the minds of “jurors” or “judges” in subsequent civil cases.

Hamako’s brief and barebones affidavit, ironically, undermine his case. The brief concedes that he had read Kurker’s report—the report that made clear A.S. told the investigator she had no relevant text messages—before the hearing, where A.S. confessed to the panel that she did have relevant text messages. And his affidavit mentions having received secret training from both Smith and Amherst before adjudicating the case. The Smith training isn’t currently part of the case file, and it doesn’t appear as if the Amherst training is, either. As seen in the handful of cases where training has leaked out (Stanford, Middlebury, Ohio State), this training almost always prompts panelists to return guilty findings. Determining whether Hamako’s training influenced his decision not to challenge A.S.’s misleading remarks seems like pretty important information, especially since if the texts had come to light at the hearing, it seems inconceivable that the hearing outcome would have been the same. And it’s hard to know either (a) what training Hamako received; or (b) why he asked A.S. about the reaction of her friends rather than her contradictory text message testimony without deposing Hamako himself. Certainly that information isn’t available from the transcript.

Amherst, meanwhile, accompanied the failed mediation by asking to submit more written material, and accompanied the request with a 25pp. memorandum. The judge granted the request, but reduced the page length. The original memo mostly either repeated the college’s earlier arguments or simply misrepresented the arguments offered by the accused student.

A couple of arguments of note:

–Citing to a decision a few years ago regarding a case at Holy Cross, Amherst asserts that it has “broad discretion” to discipline accused students. But “broad” isn’t “unlimited,” which is essentially the standard that the college would need to survive the facts of this case. Amherst, again, is demanding that no judicial review occur even in a case where the accused subsequently proved his innocence, using evidence that any reasonably competent investigation from the college would have uncovered in the first place.

–The college explains away Investigator Kurker’s failure to uncover the key evidence in the case (the text messages—which the accused student’s lawyer uncovered without the benefit of authority that Kurker possessed, much less a subpoena) as par for the course. After all, the college reasons, no one could expect that an investigator “will find every piece of information that could possibly be relevant, or that a ‘thorough, impartial, and fair investigation’ will be flawless.” Expecting the college to uncover the key evidence, Amherst contends, is expecting “perfection.” The indifference to the truth—for an institution of higher learning—is remarkable.

My guess is that Amherst won’t be sharing either this brief, or Alyson Kurker’s deposition, with parents of prospective students.

2 thoughts on “Latest from Amherst”