Imagine the humiliation a few years back experienced by author William D. Cohan. His book on the Duke lacrosse case was panned by virtually every reviewer who knew anything about the case. He then optioned the laboriously written volume to ESPN, only to see the resulting “30 for 30” documentary categorically reject his conspiratorial thesis: that the real hero of the lacrosse case was Mike Nifong, and that “something” happened (but Cohan wouldn’t say what) in the lacrosse captains’ bathroom that in some way corroborated one of Crystal Mangum’s myriad, mutually contradictory tales (Cohan wouldn’t say which one).

With his book’s chief sources being a convicted liar and a convicted murderer, who could have guessed that Cohan would have gotten the story spectacularly wrong?

When the “30 for 30” documentary appeared, Cohan penned a bitter essay, crystallizing the errors of his book into short-form. Now he’s back, using the excuse of Stephen Miller’s prominence (well after other, more thoughtful writers had explored the same issue, from the same general ideological perspective) to again slime the lacrosse players.

The essay’s most remarkable disconnect from the facts is this: “Based on Mangum’s allegations and her subsequent absolute identification of her alleged assailants after reviewing their photographs on a computer, a Durham County grand jury indicted the three—David Evans, one of the senior co-captains, and two sophomores, Reade Seligmann and Collin Finnerty—on criminal charges of first-degree rape, sexual assault, and kidnapping.”

Mangum, in fact, identified four people in the April photo array (her second time looking at photos of most of the lacrosse players). Only two of her IDs, not three (as Cohan implies) or four (as she made) were “absolute.” The only problem with her “absolute” IDs? They were provably false, though photographic, testimonial, and electronic evidence. The photo below is of Seligmann, at the time the “attack” allegedly occurred. 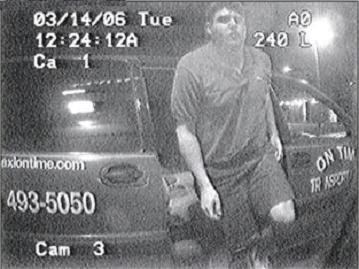 Even in Durham, it’s not possible to be in two places at once.

As for the Evans ID—even Cohan hero Mike Nifong didn’t consider it “absolute” enough to seek an indictment immediately. The actual identification, unrevealed to Vanity Fair readers? Mangum was 90 percent certain that Evans attacked her, with one caveat—he had a mustache on the night of the attack. But photos taken from the night before and the day after showed him with no mustache.

And the “absolute identification” that Cohan celebrates in this ostensibly liberal essay? Nifong had ordered the Durham Police Department to violate its own procedures and confine the photo array to white members of the lacrosse team. There were no fillers, and thus no wrong answers for Mangum. Do Vanity Fair readers (and the magazine’s editorial staff) believe that other police departments should use this type of identification procedure? This type of abuse is far more likely to be directed against African-Americans or Hispanics. It’s interesting that Cohan elected not to share with Vanity Fair readers the procedures used to produce his cherished “absolute identifications.”

There was one lacrosse player that Mangum identified, with 100 percent certainty, as having seen at the party. The only problem? He was able to prove he wasn’t even in Durham County the night of the party. Nifong knew of the faulty identification and still went ahead with indictments.

Cohan’s embrace of a transparently rigged procedure is consistent with his book’s more general contempt for civil liberties, and in particular for prosecutors and law enforcement following procedural norms. Here’s another example: “On March 23, at the detectives’ request, a local judge issued a non-testimonial order, or NTO, requiring the white lacrosse players to submit DNA samples to the Durham police. (The players’ attorneys had previously blocked the police’s request to provide the DNA voluntarily.)”

One of the students’ attorneys had objected to the Durham Police Department’s desire to interrogate the students outside the presence of counsel (something Cohan conveniently doesn’t mention—does he believe criminal suspects should chat with the police without their lawyers present?); they were willing to negotiate about interviews in the presence of counsel, a prospect that didn’t interest the DPD. Nifong’s office then sought the NTO, requiring all the white lacrosse players to give DNA.

No justification existed for such a broad NTO, since at that point in the case, the Durham Police Department had no idea how many of the lacrosse players attended the party. The demand, therefore, might have been beaten back in court—but the lacrosse players’ lawyers explicitly chose not to fight the order. They represented innocent clients, and they also recognized under North Carolina law, not fighting the order ensured that Nifong would need to hand over to them the full results of all tests done from material obtained from the NTO. It was Nifong’s decision to conceal this evidence, and his lying to the judge about his concealment, that set into motion his undoing.

More abstractly: Do Vanity Fair readers (and the magazine’s editorial staff) believe that other prosecutors should be able to use group identity as sufficient cause to obtain a citizen’s DNA? This type of abuse is far more likely to be directed against African-Americans or Hispanics.

The rest of the essay’s discussion of the case mostly consists of character assaults on the lacrosse players, embedded within a lengthy, almost voyeuristic, recapitulation of what Cohan sees as the worst elements of the lacrosse players’ spring break party. He repeats his inaccurate claim that the falsely accused players each received a $20 million settlement from Duke. (As in the book, he seems remarkably non-curious why Duke would have been willing to part with approximately $20 million total, not $20 million apiece, if the university weren’t highly vulnerable to a lawsuit.) Even though Nifong exploited the case in a desperate, and ultimately successful, effort to maximize the black vote in both the Democratic primary and then in an unexpectedly competitive general election, Cohan fantasizes that if the races of the parties were reversed, in the particular context of Durham, spring 2006, the case would have gone to trial—even though Nifong never would have had a political motive to have become involved in the case at all.

As he did in both the book and especially in his 2014 book-related publicity appearances, Cohan uses the Miller essay to imply that former Duke Trustees chairman Robert Steel supports his conspiracy-laden thesis. Yet Steel, in a 2014 e-mail to Stuart Taylor and me, repudiated Cohan’s efforts: “I have no view now, nor have ever had a view of what if anything happened in the bathroom. Period.”

Here’s what Cohan has to say about Miller, the ostensible subject of his screed: “A columnist for The Chronicle, the Duke student newspaper, Miller defended the lacrosse players in print, despite nearly universal condemnation of them by others on campus and in the media.”

Whatever you think of Miller’s politics (and I don’t think much of them), isn’t this record a good thing? A student commentator, facing a campus environment of “nearly universal condemnation” (at least among the faculty and administrators), stood up for due process—and was ultimately vindicated, when the case constructed by Mike Nifong collapsed.

In his long essay, Cohan couldn’t find room for one word: “innocent.” That’s the evaluation of the case by then-North Carolina Attorney General Roy Cooper, after SBI investigators and two senior attorneys from his office comprehensively investigated the case.

According to Cohan, at 2.36 of the video above, the attorney general only “declared the three lacrosse players not guilty.”

Miller, whatever you want to say about his current politics, got the case right. Cohan got it wrong. No amount of intemperate Vanity Fair essays will alter those facts.

The Washington Post’s Monkey Cage blog has a piece up today—by UNC political science professor Frank Baumgartner and one of his students, Sarah McAdon—examining how media coverage of campus sexual assault has changed in recent years. Their general point seems correct: that the mainstream media, at least, and especially the Post and the Times, has devoted less coverage to individual cases and more to broad, impossible-to-verify statistics. Put another way: the media has chosen a narrative (that a campus rape epidemic exists) and haven’t looked too hard at individual cases that might complicate or even contradict the narrative.

To Baumgartner and McAdon, this shift seems like a good thing—a “sea change” that “has the potential to re-frame how the public sees the issue, shifting it from one in which sexual assault appears as an aberration to one that acknowledges the suffering of victims of these crimes even more than does news coverage of occasional cases.”

Armed with such a bias, perhaps it’s unsurprising that their op-ed shows bias itself. First, here’s how the duo describes the lacrosse case: “In 2006, a woman accused members of the Duke lacrosse team of sexual assault, but the three players who went to trial were found not guilty.”

Of course, the three falsely accused students were declared innocent, a far higher standard than a “not guilty” finding—after an investigation by then-North Carolina attorney general Roy Cooper. (Cooper is now the state’s Democratic governor.) It’s not clear why Baumgartner and McAdon believe a trial occurred in the lacrosse case, and why they chose to describe an innocence declaration as a not-guilty finding.

A bit later in their op-ed, the duo make the following point, to confirm the prevalence of the problem and support their assertion that universities under-report sexual assaults: “More recently, a 2016 Bureau of Justice Statistics study found that 21 percent of female students currently in college reported being assaulted in college.”

The BJS is a problem for campus rape activists, since the bureau’s major study of the issue—one actually done by BJS employees—shows a far, far lower rate of sexual assault of college students than the Obama administration’s preferred figure. The 2016 study (of nine schools) that Baumgartner and McAdon cite, by contrast, was funded by the BJS, but was not performed by BJS researchers.

It included the following caveat: “Any opinions and conclusions expressed herein are those of the author(s) and do not necessarily represent the views of BJS and the U.S. Department of Justice.” Why, then, did Baumgaertner and McAdon cite the material as a “Bureau of Justice Statistics study”? Perhaps for the same reason they erroneously described the lacrosse case’s resolution.

Focusing on the narrative, rather than the specifics, does have its flaws.

[Update, 12 May, 7.42pm: Earlier today, I contacted the Post corrections desk, noting the two errors in the MonkeyCage item. A few hours later, one correction was made. The erroneous claim that a study that does “not necessarily represent the views of BJS and the U.S. Department of Justice” nonetheless qualifies as a BJS study remains. The claim about a non-existent lacrosse trial was removed, but replaced with this curious wording, with the correction in italics:  “In 2006, a woman accused three members of the Duke lacrosse team of sexual assault, but the charges were dropped when an investigation found no credible evidence.”

Oddly, the correction still refused to admit that the players were declared innocent by the state’s attorney general. But even odder was the added link. The authors linked not to news coverage of Attorney General Cooper’s April 2007 announcement that he was dropping charges because the players were innocent. Instead, they linked to an article published more than eighteen months later, published by the New York Times. Its headline? “North Carolina: Attack Claim Repeated.” The article described publication of false accuser Crystal Mangum’s memoir.

Linking to a lie is an unusual strategy for a “correction.” It seems as if the authors wished to be defiant in their bias.]